The rhinoplasty is an ever-popular cosmetic surgery procedure which aims to create a more aesthetically pleasing appearance to the nose and achieve harmony with the other facial features, while preserving or improving nasal function.

Whether your nose job is functional, i.e., to address breathing issues, or cosmetic or a combination of both, you will be eager to see the results as soon as possible, but it’s essential to be patient when it comes to the recovery process.

As leading London cosmetic surgeon Mr Alex Karidis often finds, “when the cast is removed in clinic at one-week post-surgery, everybody runs to the mirror to see what their new nose will look like. Although this is very tempting, you have to understand that your nose will continue to change in appearance after this point.

“There is a lot of swelling you have to contend with which distorts the appearance of the nose. Often it looks wider than they were expecting. I tell patients to get rid of their mirrors for the first two to three weeks because it will keep changing and it can upset them unnecessarily.”

In fact, there can be some slight residual swelling for up to a year after rhinoplasty surgery. “It can be difficult to be entirely accurate in regard to individual recovery,” Alex explains, “because everybody heals differently but there is a general timeline that patients can expect.”

First week: A rhinoplasty is not typically a very painful procedure which surprises some patients.

Meg underwent a rhinoplasty procedure late last year at Karidis Clinic and explained how she felt immediately after surgery. “When I came round from surgery, I was actually surprised at how the pain wasn’t as bad as I thought it was going to be. About six o’clock the next morning, they removed the nasal packing and that was probably the most painful part.” 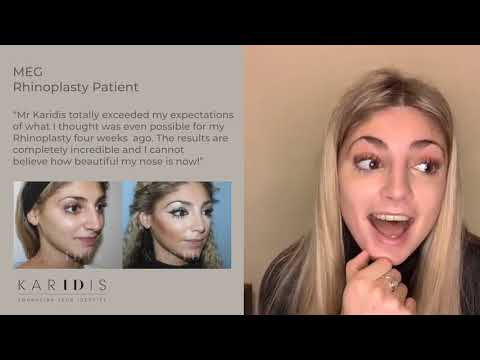 You are also likely to have some bruising underneath the eyes. Some people are lucky and have hardly any bruising but, in general, you can expect some bruising.

The cast is taken off at the end of the first week and you should be able to resume normal daily activities. Get plenty of rest as your body requires lots of energy during the healing process. Eating a balanced and nutritious diet post-surgery can also speed up your recovery.

Two weeks: The majority of the facial swelling has subsided and most of the bruising has disappeared.

“In terms of getting out and about, most patients can find they can go back to work at about ten days,” Alex explains. “Women are particularly lucky as they can apply make-up to camouflage any residual bruising.

“Rhinoplasty patients often feel self-conscious and think that everyone is focused on their nose, particularly if they’ve been unhappy with their nose for many years. I’ve had patients that have undergone reductions of very large noses or big humps on the bridge and, when they return for their post-surgery check-ups, they often say that people haven’t made any comment. I’m not surprised because people usually don’t pay as much attention as we think they do so my advice is after the first ten days or so is just get on with your life as normal.”

Sleeping with the head in an elevated position during this time can help reduce the bruising and swelling. Also don’t attempt to blow your nose, particularly if work has been done to the internal structures of the nose.

Four weeks: Patients can return to light cardio exercise, such as cycling. Listen to your body though and if something doesn’t feel right, then get in touch with the team at Karidis Clinic straightaway.

Six weeks: The bones should now be fully set and you can resume more strenuous resistance workouts and enjoy contact sports.

By six months: All normal sensation will have returned to the nose and the overlying skin. Protect your nose from too much sun exposure during this time as it can cause any scarring to darken and can increase swelling.

At one year after your rhinoplasty procedure, you can expect all swelling will have fully gone and the full definition of the nose to be evident.

If you’ve got more questions about the rhinoplasty recovery process, call us on  020 7432 8727 to arrange a consultation at the Karidis Clinic.