Neck Lift and Facelift Surgery at our London Clinic

As people age, the effects of gravity, exposure to the sun and the stresses of daily life begin to take their toll on the face. Deep creases form between the nose and mouth; the jawline grows slack and jowly and folds, loose skin and fat deposits appear around the neck.

A facelift is a surgical procedure performed to improve the most visible signs of the ageing process, by eliminating excess fat, tightening the muscles beneath the skin of the face and neck, and removing any sagging skin. On many occasions, this procedure is performed in conjunction with eyelid, forehead or other surgery. The type of facelift procedure most effective for you will be discussed with Mr Karidis during a consultation at our clinic in St. John’s Wood, London.

Aesthetically, what can be achieved with a neck lift and lower facelift?

A facelift can reverse the appearance of ageing and dramatically soften facial contours and lines, however, it must be noted that it will not erase permanent skin creases. The use of non-surgical treatments such as injectable dermal fillers, Botulinum toxin, and other skin treatments can complement and refine the results of surgery or be used to maintain top results. “A facelift sets the clock back, but does not stop it ticking” – Alex Karidis.

Am I suitable for a neck lift and lower facelift?

During your consultation, Mr Karidis will discuss your general medical history and assess you in order to determine your individual suitability. Issues that may cause problems with your surgery such as uncontrolled high blood pressure, blood clotting problems, or a tendency to form excessive scars may be identified and discussed.

If you are a smoker you will be asked to stop smoking well in advance of surgery as well as for a period after the operation (generally 4 weeks before and 4 weeks after). Smoking seriously constricts blood vessels, decreasing blood flow to a given area, which will result in poor healing and adverse scarring. Aspirin and other medications should also be avoided as they can cause an increase in bleeding.

Generally, the best candidates for a facelift are those who still possess good elasticity, and who are showing signs of sagging on the face and neck area and are within their normal weight limits. Most patients who seek this procedure are usually over 40 years of age, however, it is not uncommon to treat younger patients who are looking to maintain a youthful appearance.

Are all lower facelifts and neck lifts the same?

No, there are many different types of facelifts. The classical (skin only) facelift has undergone several modifications over the years to improve the overall results and to give a longer-lasting effect. These modifications not only lift the skin but now also address the underlying structures (i.e. muscles or SMAS), which are equally subjected to the effects of the ageing process.

The SMAS facelift is one that is favoured by many competent surgeons, although there are now many variations of even this procedure. These are the extended SMAS lift, Composite facelift and Subperiosteal facelift, Lateral SMAS lift, all of which can be tailored to suit individual needs. But the most important take home message here is that these types of operations will give you the most long-lasting and most natural results of all.

How long does a lower facelift and neck lift last?

It is impossible to provide a straight answer to this question, as everyone has different skin and muscle tissue quality. However, the results of a properly performed facelift are generally permanent in a sense that although it will not stop the clock and stop subsequent ageing in the coming years, any improvement you get will always render you much better off than you would have been had you not had surgery.

The quality of your skin tissues will, of course, help to maintain the results of a facelift, so if a patient has a good amount of elasticity then the facelift will tend to last much longer than a patient who has lost a lot of elasticity. If you think of it like a rubber band – a rubber band will become brittle and less elastic. Pulling on this excessively will result in the band snapping, whereas a fresher rubber band has the ability to stretch and recoil much better than one that has been weathered over time.

Another way you can look at the lasting effects of a facelift is to imagine you have an identical twin. If you were to have a facelift and your twin sister or brother did not, in ten years time you will look better than your twin. So again in that sense, the effects and benefits of the facial surgery will be permanent.

What are the scars like after a lower facelift and neck lift?

Mr Karidis strongly believes that scars following a facelift should be as well hidden as possible to not be noticed or compromise your hairstyle. Furthermore, the aim is for them to be of as good a quality as possible therefore all his techniques revolve around this philosophy and are thus adapted to minimise scars, yet maximising the results of your surgery.

A scar will obviously form at the incision sites. These are situated from the top of the ear within the hairline and run down over the natural crease in front and within the ear returning around behind the earlobe and up the back of the ear. Sometimes it may be necessary to add an incision under the chin, however, this will be discussed.

Scars are always red and slightly lumpy in the first few months following a facelift. Of course, light make-up applied over the scars in the early period will help hide them. One must remember, of course, it is always impossible to ultimately predict how any individual’s scar will appear. However, occasionally behind the ears, and rarely in front of them, scars of certain skin types can stretch or become lumpy.

These skin types cannot be identified prior to surgery. Often, however, these can easily be hidden by longer hairstyles but may become visible if the hair is cut short or lifted. Very occasionally a small bald strip can also develop adjacent to the scar that is situated above the ear in the temple area. Generally speaking, the incision used for both men and women is the same.

The only thing that differs is the incision on men courses down in front of, rather than within the ear, and then continues, as in women, round the earlobe and up behind the ear before curving back into the hairline of the neck. However, although as mentioned scars are unpredictable, the vast majority of patients operated by Mr Karidis do not experience problems with their scars.

As a result of careful planning and meticulous technique, Mr Karidis aim is to preserve your ability and right to be able to put your hair up comfortably without worrying about your scars in front or behind your ears being visible, yet still maximising your results.

Tips from the Top

A balanced healthy diet, rich in protein will help you heal from surgery – try drinking a fresh green juice every morning.

Write down any questions and take them into your consultation with Mr Karidis – that way you won’t forget anything.

Stock up on comfy lounge wear for after your surgery – front opening tops are ideal. 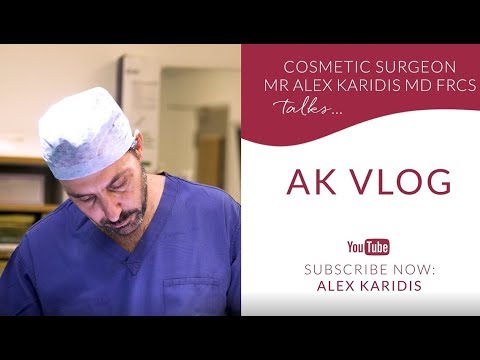 Stay informed by reading our blog articles related to …

Everything you need to know about cosmetic surgery recovery

Male cosmetic surgery more popular than ever in a pandemic